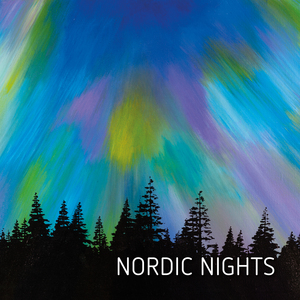 There are times in a composers life when by force of imagination they are cast into worlds not their own. And by sheer inspiration, they find themselves becoming embodied there.  It’s one of the mysteries of the creative process that musicians on the southern tip of Africa could wholeheartedly enter the soul of the North and its dark, icy myth.

This inner sojourn is what has happened between composer Nic Paton and percussionist Ronan Skillen, together with Swedish master musician Johan Hedin.

Championed by Munich-based Annette Mainka, “Nordic Nights” is now available as MAM056 on her production label Minds and Music, and distributed via DNA Musik, comprising 16 compositions.

While “Nordic Nights” is aimed at users of production music for media, this project bears a distinctly artistic mark. The key sound is an interaction between Nic’s Nordic mandola, Ronan’s percussive arsenal centering on the Swedish aludu handdrum , and Johan’s majestic and virtuosic nyckelharpa, a bowed and keyed Scandinavian string instrument.