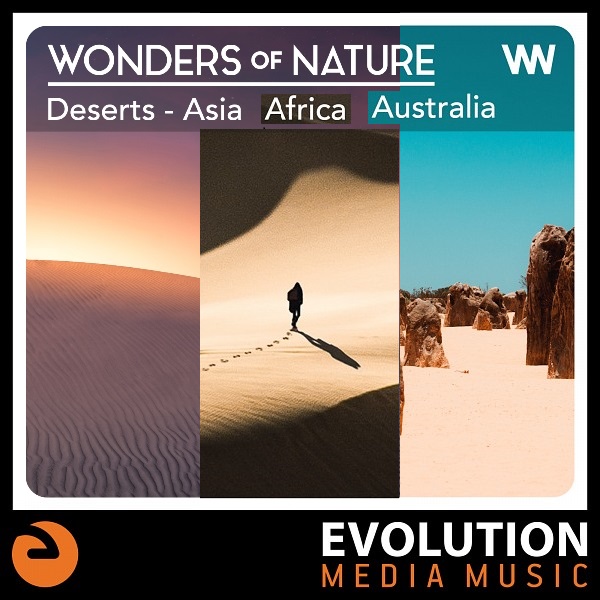 3 albums (comprising 37 tracks) of Asian, African and Australian music for deserts is now out on the “Wonders Of Nature” production music series from UK-based Evolution Media.

“In building these three varied albums around the concept of music for desert landscapes, Nic Paton and Ronan Skillen (with Jally Kebba Susso and Ali Ashghar Rahimi) have brought creativity, focus and care, along with a range of indigenous instrumentation, and crafted a set of beautiful cinematic underscores.  A pleasure to produce.”

Associated regions that have inspired the project include the Far Eastern Gobi and Taklamakan, the Tibetan plateau, the Middle Eastern Arabian Desert and the Dasht e Lut, Africa’s Sahara from Gambia to Egypt, the Southern deserts (Namib, Kalahari and Karoo), and the great arid Australian inland.

The trilogy was composed and produced by Nic Paton and Ronan Skillen, who over the same time worked with the Oscar winning “My Octopus Teacher”, contributing performances to Kevin Smuts’ score  using “undersea” instruments (some of which we used to evoke the desert soundscape!)

Additionally there were wonderful performances from hereditary Gambian griot, kora master, and composer Jally Kebba Susso (Gambia/Africa) and Iranian composer Ali Asghar Rahimi (Iran/Asia) and his consort, it comprises an exceptionally wide range of moods, both emotionally as well as in terms of musical genres.

Unique to this global trilogy are the use of stunning performances from master musicians, most notably on kora, tanbour, and digeridoo. The final list, over 80% of which are “actual” musical performances by the team on their “real world” instruments (as opposed to sample libraries) includes: